About that Boston thing: America, I have some questions.

This may tick off some folks. If that's you, I don't apologize but feel free to write your disagreement in the comments. As long as they aren't vulgar or threatening, I'll leave them in place because I'm a grown up and can handle criticism.


I've been in the media for many years now. Most of that time has been spent on the news side of the business. I've been a reporter, an anchor, a host and an interviewer. I've been in politics from time to time but got out of activism a few years ago. Since then, I've avoided making political comments on Facebook or Twitter and hope this isn't considered a political statement. It's designed to be something about culture.
In the news business, we often brag about our role that demands we ask the tough questions of those in charge. There's quite a bit of self-importance felt in newsrooms, to be honest. That's because we feel we're called to hold important people accountable for their decisions and we're supposed to be generally skeptical of things.
So, I want to question some very important people...you. The American people.
As I type this, the 19-year-old who is suspected of bombing the Boston Marathon has apparently just been captured. There are cheers out loud and cheers online over that.
If he did it, then I'm thrilled that he's in police custody.
But, America, I have some questions for you because I've been watching your decisions that I think deserve skepticism.
Maybe I was one of the few who didn't feel good about hearing that a "lock down" had been ordered for Boston, one of our nation's largest cities. Then, that lock down was expanded to surrounding towns. People were told to stay inside and only open the door for approved, uniformed government personnel.
Over a million people were ordered to not engage in commerce, not to earn money to pay their bills and deny their children an education that day. A few city and state officials (maybe just one or two) made that decision for them without any objection from what I could see.
That personnel went door to door, demanding unquestioned access to search homes without a warrant. Those teams exited their military Humvees equipped with machine guns and body armor, they demanded to be let in even if the homeowner knew for a fact the teenager they were looking for was not there. 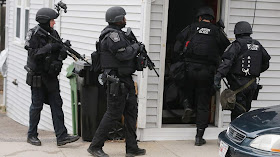 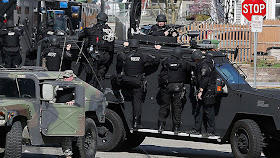 Image from the Huffington Post
What can reasonably be called at least a form of martial law was apparently not even controversial. Unquestioned compliance was demanded and given. It was maybe unsettling to some but it was accepted as just what had to be done. Everyone wanted to get the alleged bad guy.
No one seems to be complaining. But I'll ask: "If we give up this portion of our rights, what's next?"
I'm not directing this question to America's governments. That is not what the nation is. I'm asking for an answer from some important people. The people who are supposed to be in charge: you.
Are we conditioned to accept whatever we are told to do by someone in a uniform or with a political title? Have we accepted that trade of personal liberty for the promise of safety and security?
If so, the other end of the bargain was not delivered at the marathon several days ago. Is the answer to trade just a little more?
Or are we now at a point to question the direction we've gone thus far?
Remember, America, if you want to reclaim freedom and privacy, there is a risk. The world is a dangerous place. Bad people will still do bad things. With freedom comes responsibility and accountability for us all.
Do you want that or do you just not think about it and wait for orders?
I await your answer.
Mike Ferguson at 11:20 PM